After years of speculation, some mockery, and more than a little befuddlement, the Magic Leap augmented headset is arriving in the hands of developers and users — and its first product is a somewhat janky piece of magic.

After officially announcing the availability of the product for pre-orders last month,  the company is pulling back the curtains on all of the prestidigitation it’s been cooking for the past several years.

The company’s first developer conference is slated for tomorrow, with a keynote bright and early in the morning, but the $2.3 billion dollar augmented reality headset manufacturer let a slew of VIPs, media types (including your humble reporter) take a look at the first official content partnerships to come from its formerly super secret studios.

Development studios like Weta Workshop (whose partnership began with Magic Leap nearly a decade ago) and Wingnut AR (the augmented reality development studio founded by Peter Jackson) have revealed new games that involve battling robots and spider infestations (respectively); while the medical imaging company Brainlab and the direct to consumer furniture retailer and design consulting service, Wayfair, pitched their augmented reality wares to show the business use case for Magic Leap’s magic leap into virtual reality.

In all some sixteen companies pitched demos at the curtain-raising event today.

Earlier this afternoon Weta just debuted their augmented reality game as a preview to the Magic Leap conference and it’s impressive. The robot battling Dr. Grordbort’s Invaders is the clearest vision of what Magic Leap’s platform can do.

Magic Leap teased the two companies’ vision for what immersive augmented game play could like in its promotional materials for years, but the culmination of the development work the two have undertaken is about three to five hours of gameplay battling robots that appear from the walls and floors and doors of any room. It’s (pardon the easy pun) magic. 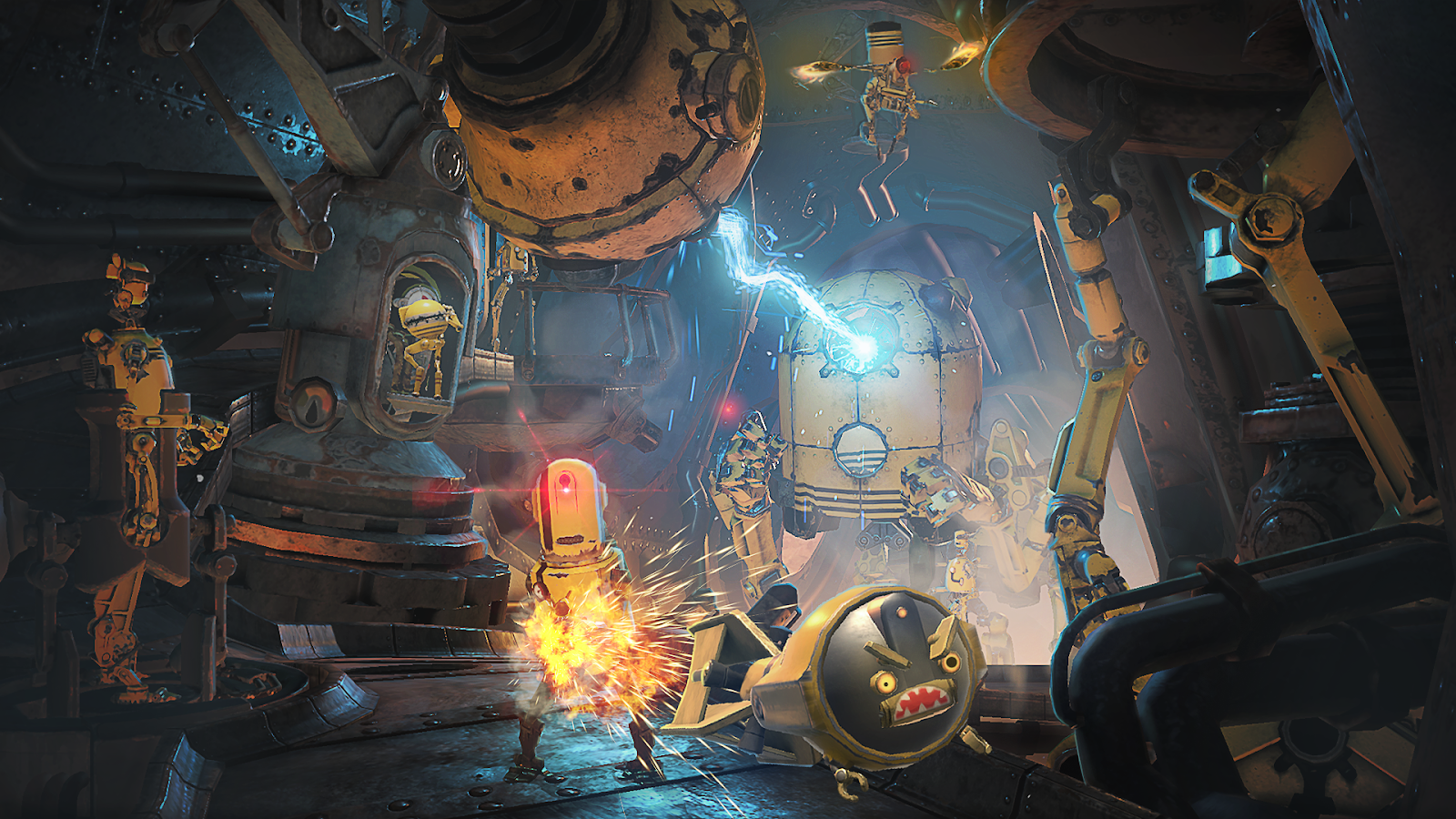 According to Weta games director Greg Broadmore, the final game is the result of six years of collaboration between the creative studio and Magic Leap.

Rony Abovitz, Magic Leap’s visionary chief executive, first reached out to Weta with a vision for “Our Blue” a far-reaching, immersive, science fiction-influenced immersive world that Abovitz wanted Weta to help realize. Abovitz kept in touch with the Weta team and as he began putting the pieces together for Magic Leap, brought the studio on board to develop content.

Dr. Grodbort’s is the first fruits of that partnership and it’s pretty stunning.

Setting aside the problems that Magic Leap still has with field of view and with slight glitches in the game mechanics (which could entirely have been the fault of this author), Dr. Grordbort’s lays out the Magic Leap headset as a convincing gaming device (albeit at a somewhat price-prohibitive $2,295 apiece.

In the game, users are given a backstory by the eponymous Dr. Grordbort, who informs players that they’re the last best hope to save the world from a robotic alien invasion. From there on in, it’s about picking up a blaster and shooting the potential robot invaders who appear from portals around a room.

To start the game, a user maps their space by wandering around it with the Magic Leap on. Once the device has the lay of the land ( a process that can take up to four minutes — depending on size) the narrative will commence and the user is drawn into Dr. Grordbort’s world and gameplay.

“The game helped shape the platform,” said Brodmore. “Dr. Grordbort’s was the problem and Magic Leap is the solution.”

Without the close relationship to Magic Leap that Weta enjoyed, the game from Wingnut’s studio was far less robust, but no less enjoyable.

In their first foray into Magic Leap’s world, the augmented reality studio created a game that puts the user into the most bizarre job training session they’ve ever experienced.

As the new hire at an extermination company that deals with some fairly vicious and viscous insects, the user is put through some paces with how to kill virtual bugs in real space. The mapping engines and graphics are exceptional, the narrator walking a user through the game shows off Magic Leap’s exceptional use of sound technology and the humor in the game is reminiscent of some of the best Wallace and Gromit set pieces.

Beginning with a simple bat, and working up through a flamethrower, players were instructed in how to kill various creepy crawlies and concoct a serum to attract others. I’m not a fan of first person shooters (or much of a gamer in general), but that Wingnut game was damn fun.

And if gaming was one side of the spell that Magic Leap was hoping to weave with new users, business use cases were the other.

In partnership with Brainlab, the company is trying to show how its toolkit can be used in both educational and operational theaters for physicians and surgeons. In a demonstration users were encourage to take a look at a replica of a brain tumor patient’s brain scan in three dimensions. The device is aimed at helping doctors plan surgeries and understand the potential ramifications of different approaches to removing growths in a brain.

Meanwhile, the retailer Wayfair put users through a demonstration of its first Magic Leap application. A visualization tool that takes furniture from a virtual showroom into the real space that furniture would occupy. 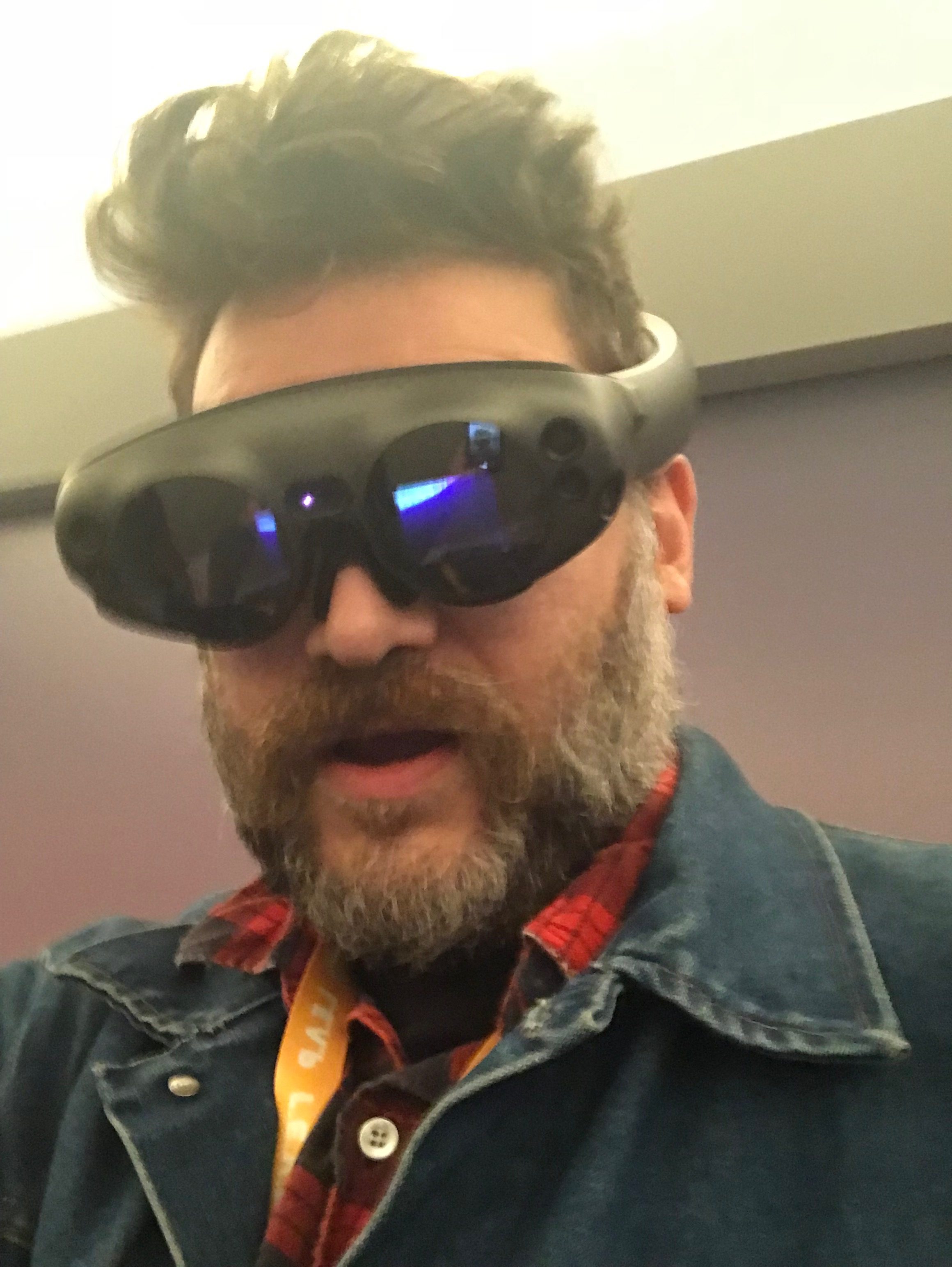 Behind all of this is a simple truth. Magic Leap needs content — almost as much as it needed to reduce the form factor and improve the usability of its first headset.

It has achieved those last two demands above the expectations of even the most hardened critic. Wearables still look goofy, but they feel good and the pack that powers the Magic Leap experience is among the best — lightweight and wearable, and with a three-hour battery charge, among the best in the industry.

There’s still some assembly required, as a user needs to determine the type of headset they’ll need and select a nosebridge that gives the headset the proper lift so its hardware can work properly. If a user wears glasses, it’s going to require a special prescription that can be ordered separately as an attachment that fits into the headset.

The other pieces of hardware packaged with the Magic Leap include a motion sensing hand controller (similar to what users have experienced as part of any video game console) and a hip pack with the processing power of a notebook computer.

The device doesn’t need to be tethered to a computer, but it does only work indoors.

Setting aside the limitations of the first generation of a hardware device, the Magic Leap is about as impressive a piece of augmented or virtual reality hardware as I’ve seen. Other companies may have better fields of view and a more compact device, but they lack the variety of content that makes Magic Leap’s offerings shine. The early partnerships the company has inked have, indeed, paid off.

And as it rolls out its offerings the company is learning the lessons of wearable headsets past.

Its initial customers — in Chicago, Los Angeles, Miami, New York, San Francisco, and Seattle — will receive a home visit from a Magic Leap employee who will walk them through the way the product works in a thirty minute to sixty minute demo. That’s the same level of bespoke treatment that Google Glass offered to its initial explorers.

One benefit of an AR headset like Magic Leap’s is that it’s much, much easier to navigate than a fully immersive VR headset. Another, is the flexibility it offers in terms of applications from a mixed reality setting.

“This is the evolution of computing,” said Shrenik Sadaigi, the director of next generation experiences at Wayfair — and the architect of the company’s experiments in augmented and virtual reality.

“We think of this as a productivity device,” Sadaigi said. “Browsing for stuff on the web. That’s the computing environment. Your space is your screen and your space becomes another variable on the computing platform. We want to make people love the space they live in. Using mixed reality to … the app that we’re presenting today we think of it as a design experience.”

One of the big breakthroughs in the company’s platform is the controller and how easy it is to use, as Sadaigi noted in our conversation. “The controller is doing a lot of work for you. [The company] is giving you something new… that is kind of the old, but in a new form. It’s simplified the experience to swiping and clicking.”

More complicated interactions can be handled by using the voice interface the company has built into the device and the eye scrolling feature that’s part of the inside out tracking the company uses.

Behind all of this is Abovitz and his crazy vision for a new platform for computing.

“That decision to start something new and bigger and more ambitious, to try to change all of computing, was a bit nuts. It’s like Bilbo Baggins having to step out of the Shire,” Abovitz told VentureBeat earlier this year. “If you spend enough hours in a Magic Leap system, it’s almost impossible to go back to your phone or computer or television. You realize that they’re very thin slices. Magic Leap gives you a giant volume of computing. When you actually get to play with it, spatial computing means you work within a volume, not just a slice.”