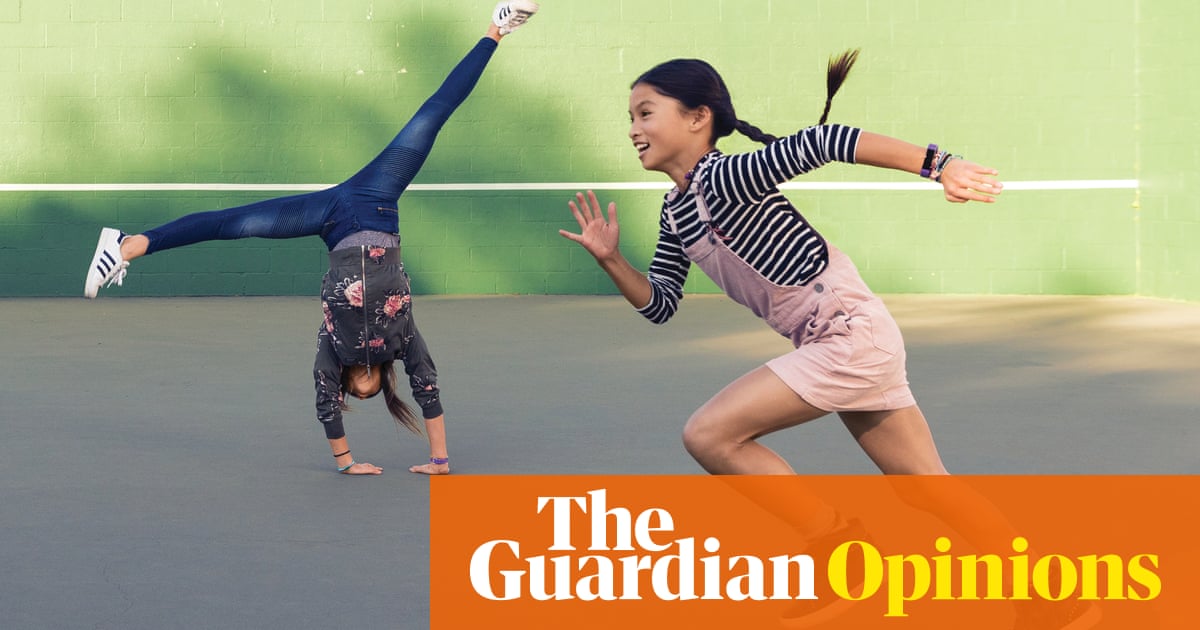 The latest product from Fitbit is called Ace. It is designed for children aged eight to 13 years old, and will help parents monitor their offsprings health. (Ace, to my ears, sounds like the online username of a predatory catfish, but lets leave that to one side.) Im not sure how it will work presumably theres a gamification element for the kids, socially sharing movement and sleep levels, and rewarding healthy choices. Or maybe it simply electrocutes them if they go into a fried chicken shop.

As any right-thinking person knows, technology peaked with the invention of the pyramid teabag. But only a fool wouldnt admit to the sophistication of activity trackers like Fitbit. Embedded with accelerometers and altimeters, they disapprovingly calculate the number of stairs climbed, calories consumed and breaths taken, producing in-app graphs that prove you are a human sausage who will die at the desk of a job you hate. The scrutiny doesnt end there. Fitbit has announced that it is looking into sensors that can track sleep apnea. Apple wants its earbuds to measure how much we sweat. Wearable blood glucose meters are being piloted, and in a few months, we will see personal hydration monitors on sale. This year, the sound of summer will be a wristband nagging you to put down the WKD and slam a Robinsons fruit shoot instead. Better than Ed Sheeran, I suppose.

Yet fitness is only the boring cusp of something much more unsettling. Wearables are the principal tools of amovement called quantified self, which believes in self-knowledge through self-surveillance. Voluntarily tracking data from ones body at all times sleep movement, gut microbiome, galvanic skin response builds a complete picture of who you are. Quantified selfers believe that intimately identifying with our biometric profiles will expand our potential, eliminate risk and optimise performance. Its known as body hacking, not at all the most psycho-killer phrase Ive ever heard. Its a perspective that, given our astonishing technological achievements, we risk sleepwalking towards. The movements co-founder, Gary Wolf, makes the case for his totalising scientific method in a TED talk in which he concludes: The self is just our operations centre.

Is it, though? We lack anything close to an understanding of consciousness, so theories of the mechanical human are articles of faith, and leave out most of the story. The self is a primeval chaos. True, the body is a homeostatic, biological wonder; its also a house of unfathomable feeling. You can monitor disrupted sleep, but its harder to touch the things that keep us up at night. Skin sensors cant distinguish between the sensations of being engulfed in panic and someone sexy touching your leg under the table. When it comes down to it, all the cardiovascular monitoring in the world wont prevent your heart from being broken. I cant help thinking real life cannot be predicted or prevented.

Fitbits, FourFits, TomToms and Jawbones are to my mind not so different to the azabache bracelets slipped on to Puerto Rican newborns to ward off the evil eye (although I believe the USB connections are better). Parents should encourage their kids to be healthy and wholesome, play swingball and hopscotch, whatever. But control is a comforting fiction. Given the emotional and physical journey of early puberty, the best possible design for the Fitbit kids wristband would be a waterproof loop, enscribed with the words: IT ISNORMAL. YOU ARE LOVED. That really would be ace.

Apps for naps my search for the perfect sleeper agent

Speaking of tracking sleep, can someone explain to me exactly what the process of falling unconscious is? I seem to have forgotten it. You lie down horizontally, close the peepers, then mentally cycle through every mistake youve ever made, yes? Or am I doing it wrong? On the positive side, I have achieved the most ironic act imaginable: suffering from insomnia on World Sleep Day, which this year was Friday 16 March.

Luckily, there are a number of apps designed to help, and Ive been trying quite a few this week, because I know the blue light from the phone is helpful for falling asleep. Ive triedHeadspace, the popular meditation app, in which a lugubrious, multimillionaire Buddhist monk called Andy bores you into a parallel dimension with his voice. Slightly better was The End of the World, arudimentary phone game in whichyou guide abroken figure through a desolate landscape, punctuated by brief flashes of his formerly happy life, over the sound of a clock ticking. The game has an eastern European childrens cartoon level of bleakness; helpful for extinguishing the last rays of light from your roomandsoul.

The most effective though, has been Palomas Bedtime, on Amazon Echo. This bizarre service has lisping jazz-pixie Paloma Faith reading Peter Rabbit stories in a coochie-coovoice, or singing Bye Baby Bunting, or making a shushing noise at you. Its the only thing that gets my baby to sleep, she says. Her baby must be hardcore, because she shuuuuuushes so aggressively it sounds like someone trying to move sheep off a lawn. Trying to understand how Faiths managers persuaded her to become an ASMRfigurehead made my head hurt so much, Ipassed out.

At least the Beast from the East had verve. It sounded like aWWE villain, knocking out the UKs infrastructure and crippling the health of its populace, as if it was a genuine invading force. Mini Beast from the East, which opened this weekend, is an unloved, creatively bankrupt sequel; the Scrappy Doo of severe snow warnings. Can we have some temperate, spring-based weather antagonists now, please? April Showers, perhaps, femme fatale of drizzle, whose consort is Vernal Equinox, amadscientist dispensing moderate anarchy from his jetstream. Basically,anything thatisnt so beastly.